3 quid for a teaspoon of cheese? The danger of hidden charges! 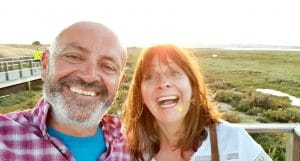 Yup…3 quid for a teaspoon of cheese. Seriously!

Del & I are not long back from Portugal. If you’ve seen our videos & Facebook lives over the last couple of weeks, you’ll know it was a sunny, relaxing break (even if Del did take a few days to properly switch off).

One night, we went out for dinner. It was an Italian place we’ve not been to before, so we thought we’d give it a go.

A couple of people had said “don’t order any Parmesan or they’ll charge you”. I thought they were kidding, taking the mick out of us Welsh tourists.

So we tarted ourselves up a bit (well, Del did) & headed out for a nice meal together. Ordered our food (and wine, obviously) & accepted the proffered Parmesan.

Bloomin’ good food it was too. Amazing, actually.

And we were having a cracking evening until the bill arrived.

3 QUID for a teaspoon of cheese!

We will NEVER go there again (and we go back to Portugal a few times a year).

Don’t get me wrong. I’m sure the owner isn’t crying into the spaghetti over losing us as customers. We’re hardly locals.

But how many others won’t go there either?

I suspect the Parmesan is actually costing a lot more than they might realise. Certainly more than the £3 they’re charging for it.

It’s be like being charged extra for salt & vinegar in a chippy. Or paying extra for gravy on your Sunday carvery.

Anyway! To cut a long story short – we actually bumped into the owner a few nights later.

I told him how great the food was (and it really was btw) but how ridiculous it felt to be charged for cheese (you know me – not one to mince my words!).

He shrugged. Said he’d always done it. We pointed out this was losing him repeat customers (like me & Del) but he didn’t seem to care.

No skin off my nose. His business; his rules.

BUT the point is here that not only is that £3 cheese losing him customers, it’s costing him his reputation.

Did those people who’d been before rave about his amazing food? The wine? The atmosphere? The views? The service?

Despite those things all being great, ALL those people did was talk negatively about the ‘hidden charges’ at that restaurant (which is what it felt like when we got the bill).

I think there’s two things to take away from this story.

1 – It’s 100% fine to charge for everything. This isn’t about being a martyr in business, eating into your margins or giving stuff away for free.

Just stick your prices up by £3 for the dish & add the Parmesan for free. All good.

But what you CAN’T do without seriously annoying your customers, is charge for stuff they perceive to be an integral part of the deal (like salt on your chips).

That’d be like us picking your phones & then charging extra to actually talk to your callers.

2 – Hidden charges are the quickest way to undermine ANY goodwill in your business.

Just be honest! There’s nothing worse than feeling like you’re being ripped off.

No-one of us mind paying, if we know what we’re signing up for. Give us all the information & it’s a yes or a no to whether we buy.

Hidden charges or bigger invoices than you expected feel sneaky and annoying.

To tie this back to Answer My Phone (as always, it’s a business blog you’re reading) – we NEVER, ever have any hidden charges.

Thinking about it, we’d probably get more customers if we did. If we advertised a super cheap price & then layered in a load of hidden stuff on the invoice (not that they’d hang around for long).

It’s £99 for your first 35 calls each month. £1.99 for every call thereafter. VAT on everything. And ALL spam calls filtered out (so you’re never charged for those).

It’s funny, we had a customer come back the other week, after he left to go somewhere cheaper. I wonder how much hidden charges played a part there.

Or whether, as he told us, he just realised you get what you pay for (like messages taken with actual care & thought to build that client relationship, rather than trying to get your callers off the phone as fast as possible).

If the team here at AMP can help expertly manage YOUR, just give us a shout on 02920 695999. There’s a 2-week FREE trial available here too if you fancy giving us a go.

3 quid cheese. I ask you. Still grates on me (boom boom).